THE BLESSINGS OF TWO DIAGNOSES: The Story of A Mother and Daughter’s Journey

The blessing of two diagnoses

From one diagnosis to another, the journey to becoming a breast cancer survivor.

How do you tell the story of a journey through breast cancer when it’s complicated and confusing?

Meg, now 62, is a mother, a grandmother, a friend. She’s known for being independent, for being there for others, and for being active in all her personal interests. Her connection to her native St. Louis runs deep. 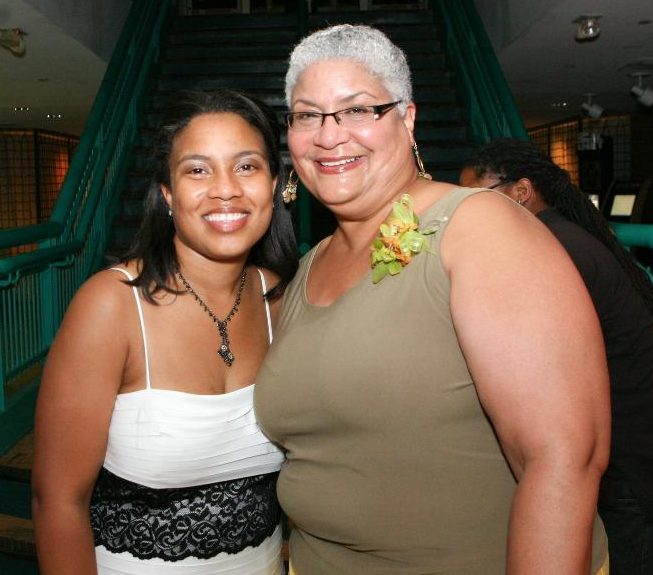 Meg has been healthy most of her life but experienced a few health setbacks in recent years. In January 2017, she had surgery to remove an acoustic neuroma, a benign tumor, which resulted in a hearing loss in her left ear, difficulty with balance, and residual facial paralysis. Weeks later, in March, she noticed a lump under her left jaw. Results from an ultrasound with an ear-nose-throat specialist were inconclusive.

In July of the same year, Meg’s daughter, Kelly, now 42, was getting a mammogram. In that moment, Meg admitted that life had gotten in the way and she’d put off getting a mammogram for almost three years. She made an appointment.

Until then, Meg had been fairly consistent with mammograms. Her mother had breast cancer twice – in 1982 in one breast and in 1986 in the other. Both breasts were surgically removed. Then, cancer returned in 1992 to her bones. She died in 1994.

Early on, Meg said her mammograms were “fine.” But years ago, a doctor “saw something.” She had a biopsy. “It turned out to be fine. It wasn’t a tumor.”

In early August 2017, Meg had her mammogram and was diagnosed with HER2 negative, hormone-positive breast cancer. She met with a breast surgeon, and then an oncologist.

But this time Meg was more concerned. “I didn’t go into freak out mode,” she said. “I can’t say that I was scared. I put my feelings on a shelf. I had to think straight to know what to do, to function, to talk to the doctor.”

“My original thought was ‘Oh, okay. It’ll be fine,’” said Kelly. “Then, it was a bit of a shock and a surprise. Then there were questions…what do we need to do? How do we take care of this?”

From one diagnosis to another

Kelly went to Meg’s appointments, asked questions, talked to surgeons, took notes and called family meetings with her siblings. She also put her feelings to the side. “I wanted to be clear-headed in the moment to hear and understand.”

“The metastatic diagnosis was challenging because it’s not curable,” Kelly said. “We needed to make use of whatever time we had. It was hard and emotional. We had to understand the worst case, and plan and prepare for it, but hope for better.”

Part of the understanding and preparation involved building a team with friends, family members taking on different levels of responsibility, and creating a website to communicate with friends and relatives and give them a chance to help with different needs.

All the while, the lump in her jaw was still present. She’d been complaining of mouth trouble; it became increasingly difficult to open her mouth. In February 2018, a spot was identified on a CT scan. The lump under her jaw was biopsied again and diagnosed as tongue cancer, not breast cancer. The cancer was at the base of her tongue and down her throat.

In a blur, Meg had gone from one non-curable breast cancer to two separate curable diseases – tongue cancer and breast cancer.

Meg endured weekly chemotherapy with a central line  and radiation Monday through Friday for seven weeks. She continued to work until the pain was so bad, she was placed on opioids and liquid hydrocodone. She eventually had a feeding tube because she was unable to eat. She couldn’t drive.  She went back to work in August 2018.

In fall 2018, Meg returned to treatment for breast cancer – surgery and radiation. What was originally to be a mastectomy became a lumpectomy, saving her breast. “Another blessing!,” she said. Meg went to work throughout her treatments, had the feeding tube removed, and looked ahead to regain a sense of normalcy.

When life changes because of cancer, what does it mean?

What does it mean for a woman to relinquish her independence? To put her health and care in someone else’s hands? To ask for help because she has cancer?

“I had to stop being involved in activities, in community, in church and socially,” Meg said.

“Over the years, I’ve been involved in emotional healing and health support groups. We talk about not being isolated, about getting outside of yourself and asking for help.

“Before I got sick, I didn’t ask for a lot of help. My fear used to be, ‘If they say no, it has something to do with me,’” Meg explained. “I wasn’t thinking about other reasons, like time conflicts or other issues that have nothing to do with me. Being sick changed my perspective. I realized that I could just ask someone else.”

“My mom has a core group of friends who are wonderful,” Kelly said. “They were doing what they could because they wanted to.”

So, what about Kelly? A wife, a mother, a sister, a friend. Shortly before her mom’s diagnosis and treatment, Kelly finished her doctoral studies in education and public health. She was beginning a new career in chronic disease and education research..

Kelly put some aspects of her life to the side. “My priorities had to shift,” she said. “I prioritized family stuff, and cut out things that could wait.

“I worried about how it would affect the kids. At the beginning of my mom’s diagnosis and treatments, we didn’t say anything to the kids. But because of the tongue cancer treatments, there’d be a visible difference in her appearance, so we had to talk to them,” Kelly explained.

“My mom’s friends were already supportive, but I knew I couldn’t do it by myself. There was a lack of control with the disease. I felt like there was nothing I could do to fix it.”

Meg finished her breast cancer treatments in February 2019. A few months afterward, she participated in a cancer survivors’ workout program. She walks as much as she can to rebuild her health and fitness.

For Meg, being a survivor means gratitude, victory, and being blessed. “I wanted to live. Not fighting wasn’t an option.”

Kelly echoed her mom’s words. “We witnessed a battle and we won it,” she said. “But I will say that it was hell as a witness. It took courage and strength I didn’t think I had.”

In January 2020, Meg received good news to start the new year – she was cleared to have annual mammograms instead of having a mammogram every six months.

If you can, during these uncertain times, please consider being a blessing to those like Meg and Kelly making the journey to breast cancer survivor right now.